Good News For Everyone

We live in an age when a simple idea can gain momentum throughout the world and the expression ‘overnight successes’ become entirely feasible.

Pre the world-wide-web though, many had to rely on nothing more than basic human skills, all the much harder for those with a really big vision.

In 1899, in Janesville, Wisconsin two travelling businessmen met by chance in a hotel.  They were both commercial businessmen and apart from choosing the same hotel they had something else in common, they were both Christians committed to spreading God’s word.  You can almost imagine their conversation.

They turned to God in prayer for answers.  For the Holy Spirit to work in the hearts of a growing band of like-minded businessmen.  And so it was, that a simple vision became a world-wide organisation called the Gideons, still active today in over 200 countries and responsible for thousands, who knows, maybe even millions of people becoming Christians.

"This is the confidence we have in approaching God: that if we ask anything according to His will, He hears us."

Their initial vision was a simple one, to put a bible in all hotel rooms, initially targeting commercial travellers like themselves.  Since then, schools, hospitals, care homes, prisons, the army, youth organisations, and individuals have welcomed Gideon bibles.

Around 3 years ago the Gideons reached the issue of their 5 billionth bible and in the UK alone, pre-Covid, half a million copies had been handed out annually in schools throughout the UK.

Gordon Finnie is a member at Tayside Christian Fellowship and is one of 6 others from the church who continue this worthwhile work today, under the banner in the UK of Good News for Everyone.

Gordon explains, “this name change should allow us to expand our Christian membership by dropping the strict ‘professional’ business criteria and including women as full members.  Otherwise, essentially our work remains the same as it always has been.  A special mention however, must be given to our Hope Magazine launched last year and already over 300,000 issues have been issued nation-wide.”

Gordon was very keen to say: “We are also on a drive to attract younger members.  Traditionally, it would be fair to say we have largely attracted retired men as they had more time on their hands – I’m not sure that is so much the case today!  Our work is so flexible that members can commit to as little or as much time as fits their lifestyle.  Even meetings now are made so much easier with ZOOM!”

The Perthshire branch is in Region 1 in the UK.  It covers Kinross to Pitlochry and Aberfeldy to Blairgowrie.  Hundreds of hotels, guest houses and B&Bs have our bibles, as do hospitals, schools, and youth organisations. 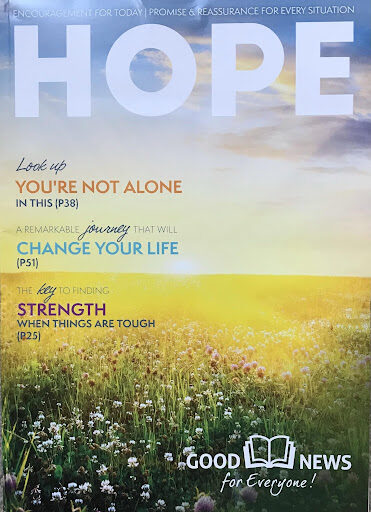 “Our work is varied and interesting and it takes us right to the heart of communities.  You could be involved in the distribution of our bibles and Hope magazine, join our prayer group, give presentations to churches and organisations, or engage with school pupils.

Gordon continued: “A highlight for me is the work we do annually with Blairgowrie High School where we become involved in their religious and moral educational studies with 1st year pupils.  We take part in 6 classes in a week with Q&A sessions and present each teenager with a bible.”

“How beautiful are the feet of those who bring good news!”

Good News for Everyone has a website goodnewsuk.com where you can find out so much more, order bibles or the Hope magazine, read testimonies of how impactful our work is, join as members or donate.

We’d love to hear from you! Please send any questions or enquiries to hello@tcfperth.org.uk